Yep - as well as the Hobby List decision made in the previous post I have made a further one.....


That was to NOT buy a consol of any kind but, instead, to buy bicycles for my wife and myself.  There are a lot of cycle trails around my home town of Leicester and as we attend the gym 3 times (or more) a week it seemed a good idea to take our fitness into a Real World environment where we can have further Fun!
So we now have a Hybrid bike each and spent a few hours yesterday bouncing around canal towpaths and getting saddle sores :)
We passed and met a lot of other cyclists on the way and we were amazed at the camaraderie and friendly politeness of them.  Not to forget to mention various types of delightful canines being taken for walks by their owners.
It was another world - no sense of rush.  Just people enjoying themselves, their bikes, families and their pets ... much better than an Xbox, PS3 or a handheld.....
Posted by Ugsduck at 05:50 No comments:

My Xbox 360 died during the last week!
My dillema is what to do about it.  I have a few options - get a new Xbox, a PS3 or a PS Vita.  There are pros and cons for each and I *think* I have ruled out getting a Vita due to the lack of decent games coming out for it - seems they didnt learn from the lesson of the PSP!
I like the "free blue ray" drive of the PS3 but I already have a few games for the Xbox.  Then again I like the look of the "Uncharted" games for the PS3 .....

Oh well - I think I will be strong and not get either for a while until I have caught up with my PC gaming.  I have quite a few games part finished for the PC and I do like downloading mods for them as that extends the life of them and, usually, improves them.

Instead I will feed my "need to spend on something" urge by buying a Proxxon Mini Router (a power tool not an internet accessory).  I am also toying with building and furnishing a Dolls House.  I would make the furniture etc myself of course and the Mini Router would work wonders (and save time) with doing that.
If I do go the dolls house way then something else will have to be shelved for the moment.  That would probably be the  "Old Western Town" which I would reduce to a couple of dioramas instead.

I could do with another lifetime again .... anyone have a time machine?

So - indecision at the moment.  I could, of course, get an Xbox, PS3, Vita and a Mini Router ....
I have a great and understanding wife so spending on it all wouldnt cause any problems in that area.  However it would cause problems with time management for all the things I have on.

There are a few more things but the above are the main ones.

Yep - looking at that I really do need to cut down on things. Its my usual "jack of all trades and master of none syndrome!
OK ..... I will shelve the Old West Town for now and the consol game playing.  That will allow me more time to devote to things in my "Man Cave" (which is spread over 2 bedrooms).  I really must finish the Haunted House and the 2 Warhammer kits first.  Once they are done I can then decide between the Western Town and the Dolls House.
Yep - thats it!! :-

PC Gaming only for the time being
Warhammer Kits
Haunted House
Laminated Flooring in my Real House.

Well that looks a lot better and should suit better time wise.  I dont like working in my Den while the wife is home so I mostly go there whilst she is at her part time job  (She is quite a bit younger than me and likes her job).

Images follow of the boxes of the products I purchased. 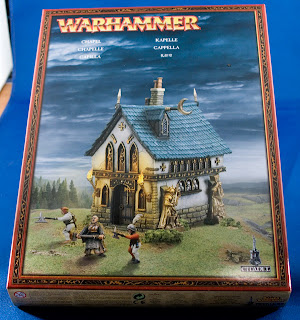 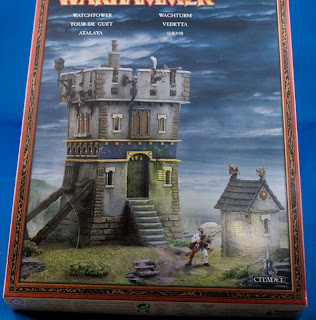 They have both been out a while but I like them and they look good to paint.


I have started on the Chapel and have erected it to the point of being ready for a primer and painting.  The image following shows the erected Chapel and the bits lying around will be put on once everything is painted - it will be easier that way.
There are more pieces supplied as alternatives but they are in my "stash" ready to be cannibalised/modified/used in other projects I may do.  Always nice to have alternatives. 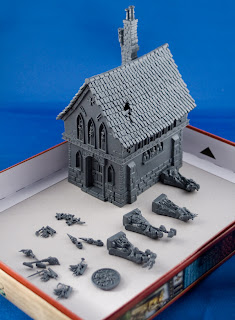 These will be slow builds because I have other irons in the fire such as my Haunted House.  I am also working on a little diorama built around a guillotine.  That diorama and the guillotine will be scratch built.
I have already got the background started and the image below shows that.  The diorama will be built into a box and will show the guillotine in early morning light.  The light will be provided by a small dollshouse bulb to make the diorama look as spooky as possible. 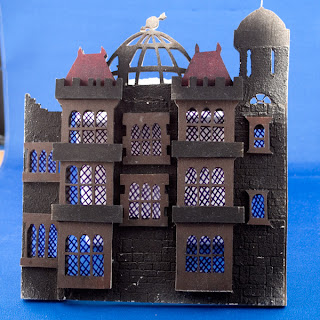 The white block is simply to hold the piece up for the camera.

Well we visited Games Workshop World and have to report it isnt as big as it looks on the website.

Most space is taken up by the Gaming Hall - which doesnt really interest me as I burnt out on that type of wargaming years ago.  I am simply building and painting for personal satisfaction.

However the displays in glass cabinets are excellent.  The work is of the highest quality and can be inspirational or off putting depending on the kind of person you are.  Me - I found inspiration especially with some of the cased and boxed dioramas.

The shop there is rather small.  It includes a couple of gaming tables and shelves of "stuff" round the sides.  However the shelves are poorly lit (especially the bottom couple of rows) and it is dificult to see when searching for a particular product.  In the end we gave up and got the shop assistant to fetch them for us.
They guarantee to supply any Game Workshop product you require.  If they havent got it on the (poorly liit) shelves then they will get it straight from the onsite warehouse within 3 hours.  Good service.  Did I mention the poorly lit shelves?

The "pub" there is large and they do meals which are of a reasonable price given that they cater for a "captive" customer.  It was hot, well prepared and served with a smile - great to see :)  The souvenir shop is in the Pub and, predictably, the prices are a tad high.  Example a pocket watch (which I had my eye on before going) had a nice engraving of the pub emblem on the front and looked good under the lights.  However I could have got the same watch without engraving for about £10.  The price of the engraved watch? - £30!!  Now I aint tight but for £30 I can get a much better quality wind up watch, with age, tastefully engraved at Melton Mowbray antiques market.

It was a nice visit though - dont get me wrong - and we came away with some good stuff.  My daughter shows hers on her Blog here:-

I will show my purchases in another post.
Posted by Ugsduck at 08:04 No comments:

Monday 2nd April will be going to Nottingham on a "Hobby Day Out" with my daughter.


We will be visiting The Foundry miniature shop, Hobbycraft and Game Workshop Headquarters.


The Games Workshop on Lenton Lane will be particularly interesting as it is much more than just a normal GW shop.  Some information is here:-

We will probably buy several large pieces from GW and look forward to the visit.


Will post pics of any pieces I buy of course :)

Following are images of the finished Garden of Morr.

Once my daughter receives it she may decide to add her own little touches along with her figures - we will wait and see :) 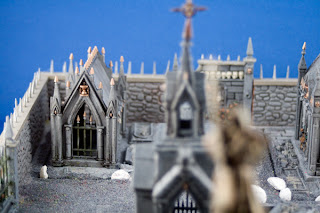 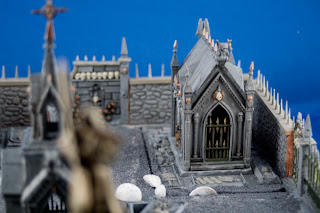 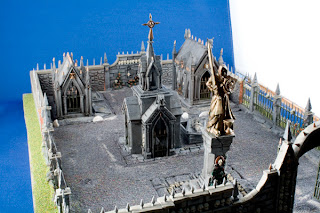 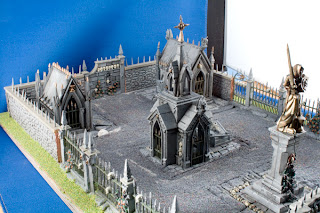 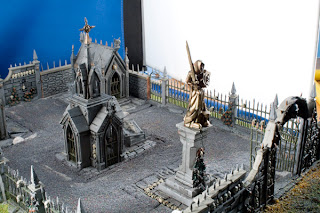 You will notice that the vegetation inside the Garden is almost all dead- just a scattering of moss and the odd weed.  That, of course, is the influence of the Undead that occupy the site.....

This is the first major piece of Games Workshop plastic stuff that I have ever made.  I must admit it was fun and I learnt quite a lot from doing it.  I will probably do a Tower or something from GW later.  In the meantime I am going to resume working on the Haunted House building, which is much larger, and start on the Old West Town.

I was going to feature the Town on its own website but have come to the conclusion that a Blog lends itself more to this kind of "serial builds" than a website would.  So the Old West Town will have its own Blog.

I will, of course, link to that Blog from here once I have something to show.

Any critique would be most welcome ... please ...

A Daughter is a little girl who grows up to be a friend...
Posted by Ugsduck at 18:01 4 comments:

Email ThisBlogThis!Share to TwitterShare to FacebookShare to Pinterest
Labels: garden of morr, images

OK - I am still alive and well.  Just dragging my feet a little.


The Garden is finished and I will put up an image later before it goes to my daughter so she can pose her figures with it.


At the moment I am working on producing an olde American west town with appropriate figures (circa 1860s).  That is taking a while as I am experimenting with different methods of building construction.  The scale will be 1/50 to match the average figures available.  I have almost decided on the method to use.


However I am not too happy with using a Blogg for the project as bloggs are a little restrictive.  I am therefore brushing up on my HTML.  If I can remember/relearn enough then I will probably make a website for the Cowboy project.  My interest is more with Cowboy figures than with Fantasy ones so a website makes sense to me.  I will, however, still dabble with Fantasy builds and will be buying some of their good stuff in a couple of weeks time when my daughter and I take a trip to Nottinghams Foundry and Games Workshop.


Hmm - there are some very good Old West buildings on this Blog :-


If I can manage something of that quality then I will be a happy man!


A Daughter may outgrow your lap but never your heart .....
Posted by Ugsduck at 05:41 No comments: